I’ve put off writing this for a while. Eight weeks, to be precise. Writing about it meant that it was real and that I had actually lost my best friend.

As you know, Charlie was diagnosed with bone cancer and had to have a leg amputation and chemo in an attempt to slow down the spread. He recovered well from the operation after an initial hiccup and was hopping about happily. We even got him to the beach a few times and he got nice run about with Meg off his lead. It was lovely to watch him so content.

Unfortunately it didn’t last. We noticed that he was starting to really struggle on his back leg. We were worried that the cancer had spread to his remaining back leg. He was due for his big scan the following week but we called the vet and after an examination, they decided to carry it out sooner. It was the news we were dreading. The cancer hadn’t spread to his leg but his lungs were full of tumours – between 20 and 30, the vet thought. He was tired which was why his back leg wasn’t coping well. Bone cancer is aggressive and he would get very sick, very quickly. We decided to let him go before he started to suffer. We couldn’t have asked him to go through that for us. Our lovely vet and vet nurse came to our house and we cuddled and kissed him in the sunshine till the end.

I think my heart actually broke that day. It is such a massive loss. I still put out three bowls, three treats, three everything because I kept forgetting he had left us. In fact, I haven’t even moved his things and they are still sitting where they were the day we lost him. I can’t bear to move them yet. Most of the people reading this will be doggy people but I’m fairly certain a lot of people don’t understand the huge hole that is left when your pet passes away. Charlie was a failed foster and I loved him the minute I saw him. Working through his issues made me love him more! He was such a daft big thing and so full of character. He was so wary of people he didn’t know. While the others love everyone they meet, he only had eyes for me and Ian. Everyone saw it. The house still seems so quiet. No silly yowling. No barking when I drive up to the house. No burying of random household items. I hope we gave him the forever home he always wanted. I am so sad that we didn’t spend more of his life with him.

Have fun at the bridge, big guy. Wherever you are, I hope I end up. 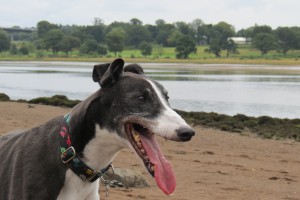