As you are all probably aware, my gorgeous Charlie boy underwent surgery to have his leg removed after a bone cancer diagnosis. It was a shocking and horribly upsetting period for all of us.

I meant to update the blog on a more regular basis, detailing his recovery, but I have found the entire process very stressful and difficult to talk about. Following Charlie’s surgery, he didn’t eat very well. In fact, he went through probably about five or six days of barely eating anything – and believe me, we tried everything. His eyes started to sink into the bones around his face. The oncology specialist just couldn’t find anything physically wrong with him. My husband and I spent about two or three weeks sleeping on the floor next to him. It was the only way he would settle. And we had to be touching him! God forbid you moved your hand off his back! He would just get straight back up and start panting and pacing all over again.

We, or at least I, started doubting everything. Should we have put him through this? Should we have just let him go when he was diagnosed? Eventually, we took him back to the vet for about the third time, in desperation. He was examined by three different teams in the vet school who tried to come up with a conclusion to why he wasn’t eating – he had lost about 3 kilos in a week. Now Charlie doesn’t react to pain. He isn’t a typical greyhound. So he is very hard to diagnose. Eventually they found a pocket of fluid above his wound. Although he didn’t yelp when it was touched,they said that he squirmed ever so slightly. From that, they gave him a pain killing injection (which apparently is very nippy and he didn’t even flinch!) and some antibiotics and nerve pain medication away with us. They expected a change in him by the next day or they would have had to admit him again. I had severe doubts that he would be better in one day but then I can be negative when I’m stressed – I’m sure the hubby will back me up on that!

Well, believe it or not, under 24 hours later, Charlie was eating like a pig! He was hopping about quite happily and his famous tail was wagging away. I honestly couldn’t believe the change in him. He has now had 2 sessions of chemo (we had to space them out a little more as his white blood cells weren’t recovering as quickly as they should) and will get scanned again after his third one to see what the spread is like. Don’t get me wrong, I am still beside myself with worry about him and how I wish this hadn’t happened to him, but he is such a happy boy and he has just accepted that this is his life now. He is back to barking at cats, playing with his toys and running about the garden with Boss and Meg. A friend whose dog is going through the same thing told me that one day I won’t feel sorry for him and I’ll accept what has happened to him and I do feel that I am getting there now. I still feel twangs of guilt and sadness but I guess that’s to be expected. I know we will lose him far quicker than I ever expected to but I am happy making the most of the time we have left.

And, look how handsome he is as a tripod! 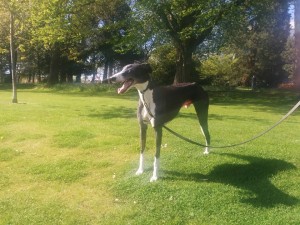