If you love them, let them go…

The past week has been a bit of a rollercoaster of emotions as our lovely foster boy went to his forever home.

When my last foster boy, Chocky, was adopted after being with us for nine months, we wanted a break. My heart actually felt like it was slowly breaking when I handed him over to his new family and it hurt – despite knowing that this family was everything I had hoped for him.

At the end of May, I got a phone call telling me about Boss. Boss had been rehomed but was coming back to the charity after showing some issues that his owners weren’t sure how to deal with. He needed fosterers who could work with him and support him through his anxieties…How could I say no to that?! Boss, a striking black boy, with beautiful snowflake spots all over his body arrived. He came in like a tornado. He was quite unsettled and had a lot of nervous energy which he wasn’t quite sure what to do with. After a few weeks with us, it was like a light went on in his head.  He became very affectionate and so awfully sweet. He would constantly come over for cuddles and loved to play and run about in the garden. He was still a bit nervy but we are confident, in time, that this will ease so we decided it was time for him to find his own perfect home.

After four months, he found that home. A lovely family fell for our boy and were smitten upon meeting him. They have a great house with a garden that I know he will just love. They know his background and are willing to put in the work to build up his confidence and that’s all we could ask for. With tears in my eyes, I let my boy go.

Fostering is hard, there is no denying it. I know many wonder how we can take these dogs for so long and give them up. I think I can see the bigger picture now. By Boss, Chocky, and the 30 other foster dogs, going to their adoptive homes, it frees us up to help other needy hounds who may otherwise have nowhere to go. I think the pain of letting them go is easier than the guilt of them never having a chance.

But, I promise, this time we are on a break! 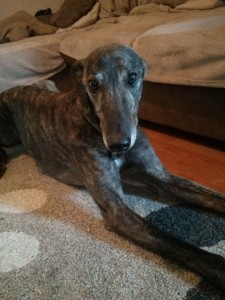 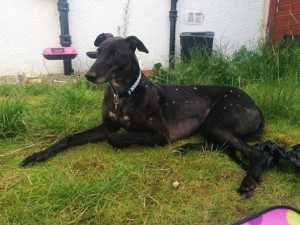