I don’t think anything can prepare you for it. The moment you’re told your dog, your best friend, has cancer. Deep down, I knew.

Charlie had been limping for a couple of weeks. He had been in our vets for xrays and nothing showed up so they put it down to a sprain. He was put on anti-inflammatories and painkillers in the hope that the limp would subside. It didn’t. I noticed one night that his leg was very swollen. It reminded me of a water balloon. The way I would touch it and it felt a little squishy. It worried me.

After a few more tests and xrays, our vet confirmed our fears. He has bone cancer. In my heart of hearts I was expecting it but I was desperate for there to be another explanation. I have seen osteosarcoma in other greyhounds so I wasn’t too surprised when we were told the only way to help him would be amputation. As you can see, my Charlie is a strapping 35 kilo lad. How would he cope without a fourth leg? Would he be able to run again? Would the other dogs give him a hard time? Would he be more defensive with other dogs outside? I don’t think I thought for a second how I would cope.

The next few days were a blur. He went to Glasgow Vet School for surgery, which luckily was scheduled immediately. I naively thought that amputation would stop the spread and he would be ok. Unfortunately the surgery merely buys him time. Six months to be exact – though this can be lengthened with chemo. He came around quicker than expected and we were allowed to bring him home two days later. I didn’t know what to expect when we picked him up. When I saw him hopping out, he was met with gasps from the waiting room and I could feel my eyes burning. But you know what? He was fine! He was so pleased to see us and that famous tail was wagging away!

Since he has come home, he has proven how amazing animals are. They just adapt. They don’t feel sorry for themselves and they don’t complain. Don’t get me wrong, he is still adjusting to his new lifestyle but his tail is still wagging and he is still the happy, loving boy he has always been. I have taken it worse than him. I am struggling with him having three legs. I’m finding it hard to look at the empty space where his leg should be. I am worried about him constantly and always checking he is ok. Meg and Boss haven’t even noticed he is different. They are just so pleased that their pack is back together.

We will learn his prognosis when we take him back to get his stitches out. I hope we still have a long time left together but if not, I know that he is a contented, amazing and brave boy who has given me a lot of companionship and friendship over the years. We fostered Charlie for ten months and due to his various issues, there was little interest in him. It’s other people’s loss; I don’t regret a single part of making him a part of our family. 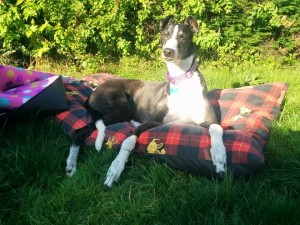